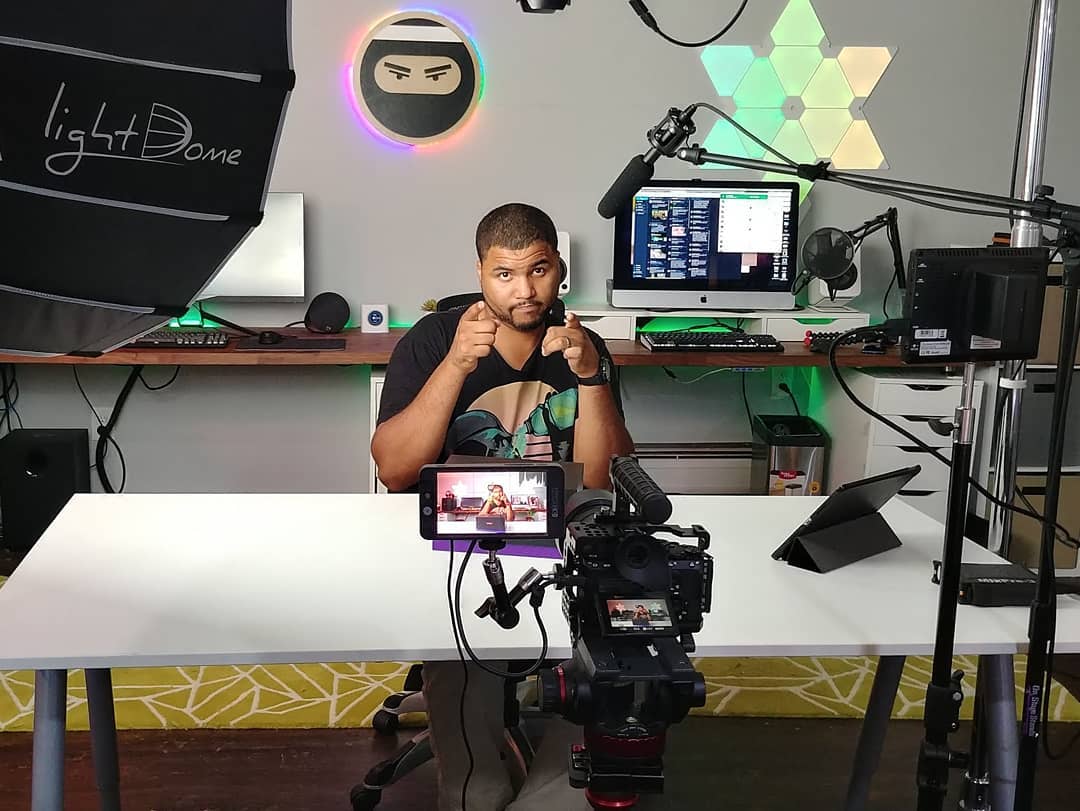 We recently had an opportunity to speak with rising Instagram Tech Influencer, Kevin “The Tech Ninja” Nether.  We also asked The Tech Ninja for some gadget tips and how he discovered his passion for technology.

The Tech Ninja currently has close to 13,500 followers and he averages close to 200 Likes per post.  The Tech Ninja can be found here on Instagram and he also check out his YouTube channel here.

We were searching for tech reviews on YouTube and Kevin’s reviews caught our eye.  We wanted to interview him, so we could get a little background on himself and provide our readers with some insightful tips.
It was a great opportunity for us to get to know the people behind the YouTube videos and Instagram content.

1. How did you discover your passion for technology?

I’ve always been into technology. I don’t recall a moment, but I remember “unboxing” my mom’s camcorder as soon as she bought it.. I think I was around 9 years old, I learned all the new features and sat the family down to show them how it works.

2. What are some of your favorite hardware? Which one do you tend to use most?

Smart home stuff. For some reason, I always wanted to be like the Jetsons growing up. And having a smart home is the closest thing to it. I really dig the NOON lighting system. It just looks super clean, and controlling all your lights from one spot with a few swipes is pretty dope.

3. What are some gadgets you take with you when traveling?

I always take my Nintendo switch. So many great games on there, it makes that 5 hour flight that much easier. I also take my iPad pro and I typically download some shows to it. I just watched Jack Ryan on my flight to LA, and back. I also keep my Bose QC35s, to keep the background sounds out, while enjoying the sounds.

Currently, I have a 2013 Macbook Pro. It’s crazy that A laptop from 2013 is still current enough to edit my 4k YouTube videos. Granted i’m not a heavy laptop user, but it’s paid for itself several times over.

Yes, I own a DJI Mavic 2. DJI is at the top of the market for drones, and the Mavic 2 gives you a lot of the cool features of the bigger and more expensive drones, while retaining a smaller form factor.

6. What drone recommendations do you have for people who can’t afford a DJI drone?

Honestly – DJI has drones at all price ranges now. And currently, I feel it’s DJI’s world, and everyone else is doing catch up. But to answer your question: Ryze Tech Tello Quadcopter. Its $99 – 720p camera, and 13 mins of flight. Not bad for $99.

7. What should people look for in a drone?

That’s tough.. in no order: 1) Danger SideKick, that was just a super cool phone with a sideways flip out keyboard. I felt like I was the coolest dude in the room when I had one. 2) Dreamcast. I spent more time than I want to know playing Dreamcast. And also, the online functionality was mind blowing to me. I had some epic NBA 2k battles online.

9. What’s the difference between a good and great gadget?

I think it depends on the person. I think great solves a problem for you. so smart home, the smart garage door. It fixes the problem of leaving the door open (I do this a lot). The smart door tells me if it’s open, and I can close it from my phone. A good gadget does not solve a problem, but it’s just “good”. It’s just a better version of something you’ve already seen.

ahhhh this is a sensitive subject for me. I’ve been using android for 10 years. but i JUST made the switch. The apple watch did it for me. The health features are huge. Knowing that this watch can save my life due to its EKG feature that’s enough to keep me.

Although Android is more powerful, I found 99% of the time I’m doing things that iOS can do. There are some learning curves to deal with, and some annoyances, but overall I’m enjoying being on iOS. I ended up picking up iPhone XS Max.

11. What are your thoughts on the new iPhone?

It’s Apple’s Best iPhone. That’s not saying much, but it’s a small upgrade compared to last years. For some people, it’s their first time using an iPhone without a home button, and a big adjustment. I love the gestures and I think it works great. It’ll be a treat for people coming from the iPhone 7, or even 8.

12. What are your thoughts on wood phone cases?

They’re unique, and I’ve used one before. I love how they look over time. Very rustic.

I grew up on Adobe, I’ve used Adobe over 15 years. It’s all I know. However, GIMP has a lot of features that Adobe has, and plus it’s free.

14. What are some of the most annoying thing influencers do?

15. How did you gain all your followers?

I just made content I enjoyed for years. I wish it was something more than that. But I just consistently made videos that were topical, and if you do anything for a few years to the best of your ability, you’ll find success.

16. Do you have any words of wisdom for aspiring tech influencers?

Just do it for the love and passion. The followers, and everything that comes with it will follow. Just focus on being your self, and keep the passion that you have towards what you are talking about to the forefront and it’ll shine through.

Also, WHEN you get discouraged. It’ll happen.. Just think about the number of subscribers you’ve had. And picture yourself in front of that many people in real life. That’s a lot of people. Enjoy the ride, and you get out what you put in!

You can check out Kevin The Tech Ninja Nether here: